Ariana Grande: Thank U, Next

Intro- Thank U, Next is one of Ariana’s best albums to date. Pop music was fusing with hip-hop and trap music. So, Ariana went that way. It was very different than her radio friendly hits. I love this album so much. It took a minute before I finally decided it was her best album to date. We will talk about Thank U, Next came from a hard time for Ariana to get over some hard things in her life and be able to show us how amazing and versatile and fast of a worker she is. I have to also say that when Thank U, Next was announced, everyone had blast saying it and just adapting it to their everyday lives.

The Album- This is Ariana’s 5th album and it was made in 2 weeks right before the end of 2018. It was released 6 months after her 4th album Sweetener. Which was not a typical album roll out. But she had a lot of stuff happen in a short amount of time. So, this album was helpful for her to get through her life. Her engagement with Pete Davidson ended in October and her ex-boyfriend Mac Miller had died in September of the same year. Literally a month apart of each tragedy so she had a lot of stuff going on. So, she took her pain and her sadness and put it into an album that basically help shape her career for the future. It’s also her 2nd album to be nominated for a Grammy. She won for her last album and I had for sure thought she was going to win for something from this album. The song Thank U, Next was also her first #1 on the Billboard 100 and The album of the same title topped the charts of the Billboard 200 for a little while. So a big career high and her personal life was at a low. But she took this album and made magic and I love this album so much. This era was such an amazing one and I cant wait for her next album. All I have to say is Thank U, Stay.

1. Imagine- This song is about her ex Mac Miller and how she would remember how they used to live life their own way. Referencing eating Pad Thai and sleeping until noon. This song is slower but very pretty. It was a promotional single when Thank U, Next was coming out. It’s a very pretty song and her vocals are on point. I thought it was a good stepping off point.

2. Needy- This song is about being, no pun intended but, needy and how in a relationship she is usually not like that, but she shows that she can be need and how sometimes it’s annoying to be needy but her significant other loves her for her. So, if she wants to be needy, she can be. This song isn’t long but it’s still pretty.

3. NASA- This song is about not needing someone in your bed or in your life, so you just need some space so it’s a more dramatic version of having space from someone that you don’t need to get to sleep at night. This song is so catchy, and I love the line “I’ll be the universe and you will be NASA” and the way she spells it out, it’s a fun song. If you want some space from an ex or someone you want to be away from, blast this song.

4. Bloodline- This song is a bit sexually ambiguous song but it’s also a fun song to sing. Its really about wanting to have a sexual relationship without getting emotionally attached. Some people don’t like to admit it but it’s very relatable and the beginning of the song is a sound bite of her grandma Nona, talking about a hearing aid but if you didn’t know it was about that, you would think she is talking about something else. So, it’s very cute and fun.

5. Fake Smile- This song samples a song called After Laughter (Comes Tears) by Wendy Rene and its very throwback and the whole song isn’t all throwback, but you do hear it throughout the whole song but it’s very sentimental. The song is about being out in the public and you have to put on this face for the camera when you are dealing with your own drama. I am not a celebrity, so I don’t know how that feels but I have seen how being in the public eye, and it’s very hard to not show your emotions and be perfect for everyone else. It’s kind of sad but it’s understandable.

6. Bad Idea- This song is about breaking up with someone and thinking it’s a bad idea but you don’t care cause you think it’s fun and you should just break up and move on. It’s a dark message but the song is so up-tempo. I like how songs seem like they are one emotion and then they turn it or twist it up. So, I like this song. It had a minute and a half of instrumental at the end but kind of like a dance break. I like this song.

7. Make Up- This song is about liking the idea of breaking up with someone just so you can make up with them cause you like to fight but the sex or the relationship is just so good. So, this one is also a short song but it’s also a relatable song for some people. I think this song was a sleeper song. It grew on me as time went on. But now its catchy enough to listen to and vibe to.

8. Ghostin’- This song is about also her ex Mac Miller and it’s about her being in a relationship with Pete Davidson and her dreaming and thinking about Mac. It’s hard to have someone pass away and not grieve their passing. This song is so beautiful, and her vocals are just on point. It’s a slower ballad but also a powerful song. I listened to this song to get me through some dark times last year and this year. So, I have a special place in my heart for this song. Very gorgeous.

9. In My Head- This song also begins with one of her friends named Doug and he left her a voicemail talk about the song and how he is coming over to be there with her. This song is about wanting the perfect man that you create in your head. When you are in a relationship, you try to change the person you care about so you can have the perfect life and it never works out the way you want it to. So, you just have to realize that life doesn’t go the way in your head. This song is also catchy. And I just can’t skip this song when I hear it.

10. 7 Rings- This song is the core of trap music. It’s a very hip-hop based song but its so fun and just catchy and you just can’t help but feel like a boss or just a bad b**ch. I loved the song even when it first came out. The video helped sell the song. This was the 2nd single when it was released. The video is what would happen if you went to an Ariana Grande Party with alcohol and games and hair and just being pretty. It also sampled My Favorite Things from The Sound of Music and it is just a perfect Ariana song. Its gets me hyped.

11. Thank U, Next- This song was the 1st single from the album. It ended the last album’s era and started this era. The is the first video from the album. The song and the video just complement each other. The song she references all her exes, Big Sean, Ricky Alvarez, Pete Davidson and Mac Miller. It’s basically saying thanks for all the memories and the bumps all along the way, but she is still thankful and not being petty. The video was even better. It featured scenes from Legally Blonde, Bring It On, Mean Girls and 13 Going on 30. So, it was iconic for its time. I love this song

12. Break Up With Your Girlfriend, I’m Bored- This song is about wanting someone she finds so attractive that she wants that person to break up with their current boyfriend so she can have them to herself. It was the 3rd and final single from this album. It sampled It Makes Me Ill by N’Sync. It’s also a very catchy song and I feel like this song you can vibe to, but I love it so much. In the video she basically does what the song says which gets a guy to fall for her and to basically push his old girlfriend aside, but the girl looks so much like Ariana so it’s hard for him to pick. Great way to end the album.

Cover Art- The album artwork is basically Ariana laying down and the picture is her upside down. The physical copy of the CD is black, and the Vinyl and Digital Edition are pink. It’s a very simplistic cover but it’s perfect and it features some Japanese characters. So she was trying to make another vibe with it.

Overall Rating- I would give the album a 5 out 5. It’s probably one of her best work yet. She continues to blow her fans away like myself and I just can’t wait for her next album. This album made 2019 the year it was supposed to be. Like I said before, it got me through some stuff and if I didn’t have this album, I probably be a different person. So, Thank U, Next is here to be cemented into my discography. This also made me more of an Ariana fan. I just cant wait for the next one. 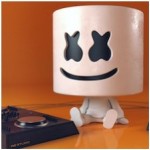 View posts by K.T. Cox
A guy from the southeast passionate about music, movies, TV and video games. Hardcore audiophile, collector of CDs and vinyls, Youtube connoisseur, and all about the superhero life. Music is life; all else is secondary.